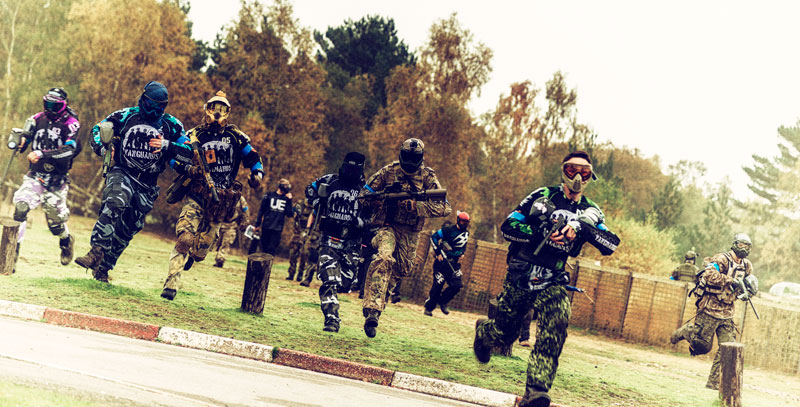 Paintballing is one of the most popular extreme sports in the UK. There are hundreds of venues in the UK alone, where anyone can visit for a game of paintball. But, in the early 2010s, paintballing got a new lease of life when the UK started to embrace MagFed games. MagFed is a form of paintball that is played with a magazine-fed marker giving the player a much more realistic experience throughout the game.

This month, we take a look into where it all began – the history of paintballing and the subsequent rise of MagFed markers that has changed the way we look at the paintballing industry… and of course how Battlegear UK fit into this world.

Paintballing – back to where it all began

As far as history goes, paintballing is a relatively new sport to our timelines. The origin of paintballing began in the 1960s when Charles Nelson of Nelson Paint Company invented the first commercially successful paintball marker. The marker was not originally intended for the games as we know them today, rather to make marking trees and livestock easier to mark from longer distances – great for cattle farmers and rangers. In 1972 the company tried to sell the marker but it wasn’t to be. Not until his second attempt did he find success with BB manufacturers Daisy.

1981 saw the first of paintball games when friends decided to settle a long argument of who would survive city men or country folk. After seeing an ad for Nelson paintball marker the idea of a survival game was born using the markers and a set of rules drawn up by one of the friends. 12 men (6 from the city and 6 from the country) were invited to play the game which was in capture the flag format. Each player was given a marker, eye protection and a map of the playing field. The game was eventually won by a countryman who didn’t even use his marker!

It was this simple game to settle a friendly argument that started the paintballing industry as we know it today with over 700,000 players around the world, proving that sometimes the best ideas can come from settling an argument between friends!

The introduction and rise of MagFed games to the paintballing world

Not until 2013 did the UK see its first MagFed paintball game come to fruition. Operation End War was sponsored by Rap4 UK, however, it would appear that MagFed markers were being sketched and created as early as the late 1970s. One venue that has supported MagFed games in the UK is Outpost, Chester. With an incredible set-up and run by avid paintballers, this site has a lot of kudos amongst MagFed players and organisers.

MagFed games have only ever increased in popularity since the release of the first MagFed marker in the late 1980s. No longer do players feel as though they are in a paintballing game, now with the efficiency of the MagFed markers, players feel as though they are soldiers in a war which makes the game much more appealing for its intensity and tactics.

MagFed games have become popular amongst avid paintballers for a variety of reasons. Those looking for a little more realism in their paintball experience choose MagFed due to their loading method and that the markers look more realistic. MagFed games provide an atmosphere of intensity and excitement that pulls players into the game.

The benefits of MagFed games over traditional paintballing

MagFed markers work by attaching a pump to the marker which feeds the paintballs from the magazine directly into the chamber. This means there is no need to remove the spent paintballs before reloading. This allows you to keep shooting without stopping to reload. You can shoot as long as you have ammunition left in your magazine.

There are many other benefits to choosing a MagFed game over a traditional paintball style including:

When deciding to participate in a MagFed game, the odds are evened out slightly by ensuring that all players are using the same type of marker (MagFed markers only). This means that the game remains tactical, intense and safe for all players involved.

Find MagFed games in your area with OMG Events

Battlegear UK – your trusted supplier of MagFed equipment and supplies

Battlegear UK offers a wide selection of MagFed equipment and supplies from renowned brands. The company has a strong history of supporting the MagFed community and are the leading MagFed paintball supplier in the UK. You can purchase from a wide selection of products from brands such as First Strike, Tippmann and Planet Eclipse (amongst many more).

We hope you enjoyed our article about the history of paintballing and MagFed games in the United Kingdom. With this knowledge, you can make the most of your paintball or MagFed games when using the right equipment. So what are you waiting for? Visit Battlegear UK to find your equipment and take a look at upcoming games from OMG Events.