First Strike Paintball
First Strike Paintball are a worldwide market leader in high-quality Milsim Magfed markers. Not only are their markers well built but they also offer versatility through a large range of accessories and add-ons that can be used to turn a basic T15 rifle into a variety of platforms such as CQB through to DMR. We import, stock and supply more FS paintball equipment in the UK than any other retailer, so we know a thing or two about this US brand. You will never get bored of it! Shop First Strike Paintball at Battle Gear UK and browse the selection of Magfed paintball markers, paintball sniper rifles, paintball pistols, parts and accessories.

Personalize your T15 to your style of play – the First Strike T15 Rifle accepts multiple “real steel” parts so you can adjust your gameplay, allowing for more modifications, and increasing functionality.

Players can choose to use our patented magazines or a
standard hopper. The dual feed allows players to quickly
switch between “hopper mode” and “magazine mode”
during play for optimum versatility.
1. A Standard Hopper
2. Magazine And Standard Hopper 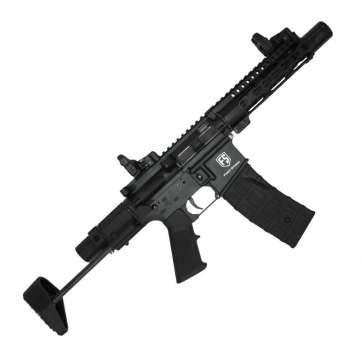