Carmatech Engineering
Started in 2010, Carmatech Engineering Inc. (CEI) is a mechanical engineering and product design company that utilizes engineering fundamentals to develop products under the CEI label. Since July of 2010 CEI has been working to refine and perfect the SAR12/ SAR12C for paintballers everywhere. Designed in house by Carmatech Managing Director, these specialist markers are made and assembled in small batches almost to order. Every marker is tested for consistency and ranged in using Carmatechs own dedicated Supremacy paintball scope. Carmatech is also very well known for its Nemesis barrel.  This barrel was designed to specifically work with First Strike rounds (FSR).  They also offer an amazing optic for use with FSR, the Supremacy Scope.  This too was designed specifically for use with FSR. Everything Carmatech produce is geared to precision performance for accuracy in paintball and the Nemesis rifled barrel range is no exception. Every barrel starts as a block of aluminium which is then machined down to a finished product. This ensures the straightest barrel possible and the rifling is Carmatechs own patient screw that is designed to perfectly match the FSR projectile from First Strike.

Built to order. This product does NOT come in a retail box and may vary from the pictures shown! Currently supplied with an all-Black Backpack and no handguard/foregrip

The Carmatech SAR-12 is a complete paintball sniper rifle delivered with a Supremacy Scope (2-6x magnification/paintball dedicated), weaver rail, bipod and 4x 18round magazines. So you have everything in one set that you need for professional entry as a paintball sniper.

The 4th generation is characterized by a few significant changes. Every 4th generation SAR-12 has a new, significantly steeper rubber grip. This new handle is intended to improve the handling of the marker and to be equally comfortable when lying and standing.
In addition, the gen. 4 SAR-12 rifles as standard via the new 18-round SARX TrueFeed Magazine. You can now fire 18 rounds in a row. – The old magazines had only 2x 6 rounds in the chambers.
The new SAR-12 has also changed a bit visually. The characteristic front shroud is no longer included. The marker has installed the AR-15 handguard adapter as standard. This was probably done at the request of the US players since many wanted to customize their SAR-12 with original AR-15 Shrouds and other upgrade parts. Since these components are a little harder to get here on land, European customers will have to dig a little into the bag of tricks when it comes to optics.

The Carmatech SAR-12 Gen. 4 (newest model) is a paintball sniper rifle that was specially developed to meet the needs of scenario paintball players who, on the one hand, like it very realistically and, on the other hand, like to shoot long distances with First Strike paintballs.

The SAR-12 currently offers the best available base for snipers in paintball. The single-loader bolt principle is reloaded manually, as with a real sniper rifle. To do this, the bolt must be moved back by hand using the clamping lever on the side of the marker and then forward again until it audibly engages. Only then is the marker ready to fire.

Due to this bolt construction, the bolt chamber is completely closed before the shot, and the bolt does not have to move towards the ball for the shot. One, therefore, speaks of a shot from a stationary projectile position. That makes the SAR-12 extremely precise. Players on the field report shots/hits at distances of over 100 meters!

Furthermore, the SAR-12 works with a working pressure of only 550 PSI, which makes it even smoother to paint and also significantly quieter. Who plays abroad at a shooting speed of 300 FPS and shoots at targets from a distance of more than 50 meters can usually remain completely undetected, because the opponent can no longer hear the shot of a SAR-12 from this distance.

The generation 4 markers of the Carmatech SAR-12 model ranges are supplied with the new SARX 2022 magazines as standard. These now hold 18 shots that can be fired in succession without gaps. The previous models (up to Gen. 3 model ranges) had 12-round magazines with 2 separate chambers. After 6 rounds the shooter had to remove the magazine and turn it to continue shooting. The new SARX magazines thus offer 75% more capacity and can be fired in one go. The Carmatech SAR-12 currently has the most powerful magazines of all MagFed paintball markers.

Instead of a marker bag, the SAR-12 comes in a practical sniper backpack. This offers enough space for the marker and plenty of accessories. 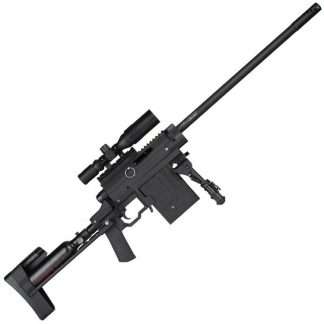